Visit the main sites this beautiful city has to offer. 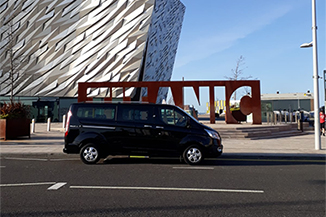 The Belfast City Sightseeing Tour is tailored for the individual and can include many interesting sights around the City Centre and surrounding area. Depending on your interests some of the sights that may be visited are;

Titanic Area – Large scale waterfront regeneration area comprising of the Titanic Museum, The Pump House where the famous Titanic Ship was fitted out, Titanic Studios where the famous Game of Thrones is filmed and entertainment area.

Belfast City Hall – This was designed by architect Sir Alfred Brumwell and was opened in 1906. This is the civic building for Belfast City Council. A beautiful Baroque Revival style the building sits on one and a half acres and the Titanic Memorial is located in the grounds.

Stormont, Parliament Buildings – Parliament buildings is located in the Stormont estate in the east of the city. Opened on November 1932 it houses the Northern Ireland Assembly. A statue dedicated to Lord Carson can be seen on the drive up, unusual as it was erected prior to his death.

St Anne’s Cathedral - Located in the Cathedral Area of Belfast now a very trendy area with numerous restaurants and bars. The cathedral was completed in 1904 with the 40 metre Spire of Hope erected in April 2007.

Queens University Belfast - one of the UKs 10 oldest universities, its building was designed by Sir Charles Lanyon. Many famous people studied at the university including Seamus Heaney, Liam Neeson and Patrick Keilty.

Crown Bar – Owned by the National Trust, this pub in Great Victoria Street is one of the best known in Northern Ireland. It was renovated and renamed in 1885 it had a reputation as one of the finest Victorian Gin palace of its time. Restoration was completed in 2007 and the inside of the pub has beautiful tiling, woodwork and stained glass. Why not finish the tour here and enjoy a drink and a bit of craic.

Belfast Castle – situated in the north of the city on the slopes of the Cavehill Country Park the castle sits 400 feet above sea level offering beautiful views of the city. The castle has an antiques shop, immaculate kept gardens ,restaurant and visitor centre.

This is just a few ideas of some of the many interesting sites in Belfast, but please contact me directly to design a tour which suits your needs.